The Paleomagnetism Laboratory at Western participates actively in research projects (leading and collaborating) with a wide range of collaborators (national and international) from all disciplines dealing with magnetic properties of natural materials. 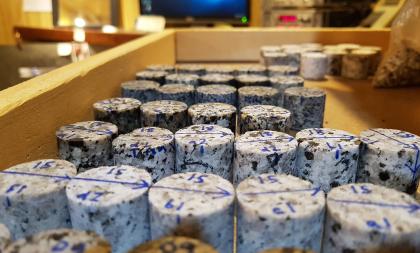 Professor Bernie Housen currently leads a project aimed at resolving a long-standing debate regarding the Apparent Polar Wander Path for North America during the Mesozoic.

Environmental magnetism based on tree leaves

Tree leaves may be powerful tools for monitoring air quality and planning biking routes and walking paths. According to an initial study developed in Bellingham by sampling leaves from 41 samples (15 sites), leaves along bus routes were up to 10 times more magnetic than leaves on quieter streets. That magnetism comes from tiny particles of pollution—such as iron oxides from diesel exhaust—that float through the air and either stick to leaves or grow right into them.

Tree leaves were collected in trees from the city and in nearby rural areas. Within the city, results from trees located close to busy bus stops and high traffic routes were compared with those from parallel but much quieter side streets. Moreover, they spanned the sampling between early and late summer (as well as subjecting samples too dying procedures), in order to compare differences related to humidity degree and the effect of rain in the accumulation of particulate matter in leaves.

What started in Bellingham city area rapidly evolved in a project considering Seattle area and the possibility to compare results from industrial areas versus urban, highly populated areas. This stage included the collection of around 200 samples and the application of up to 8 different magnetic methods, combined with electronscopy

Inhaling particulate matter has been linked to a number of negative health consequences, including breathing troubles and even heart problems. Tiny particles bypass the airways and get deep into the lung tissues. While many details remain to be worked out, these studies were able to suggest collecting tree leaves as a simple and effective way to measure the load of particulate matter in the air.

In 2010, Dr. Luigi Jovane had the chance to join the IODP Expedition 325, focused on coring several offshore sites along transects on the Great Barrier Reef using a dynamically positioned drilling vessel. The goals for this sampling were to reconstruct the deglaciation curve for the period 20,000 to 10,000 calendar years before present (cal. y BP) in order to establish the minimum sea level during the Last Glacial Maximum and to assess the validity, timing, and amplitude of meltwater pulses (so-called 19 ka MWP, MWP-1A, and MWP-1B events; ca. 19,000, 13,800, and 11,300 cal. y BP), which are thought to have disturbed the general thermohaline oceanic circulation and, hence, global climate.

The second goal was to establish the sea-surface temperature variation accompanying the transgression at each transect, in order to examine the impact of sea level changes on reef growth, geometry, and biological makeup, especially during reef drowning events, and will help improve the modeling of reef development.

The third major objective will be to identify and establish patterns of short-term paleoclimatic changes that are thought to have punctuated the transitional period between present-day climatic conditions following the Last Glacial Maximum.

Paleomagnetism in the Kodiak Islands (Alaska)

Up to three tectonic models have been developed in order to set light to the geological features involved in the boundary between North America and the Pacific Basin. The Ghost Rocks Formation in the Kodiak Islands is the second youngest member in the accretionary complex of the region and involves both turbidities and volcanic flows.

The paleomagnetic characterization of these rocks was applied in order to test the proposed models for Paleocene tectonics, focusing on the history and magnitude of post-Paleocene terranes displacement. Sampling developed during 2006 and 2007 summers allowed to collect around 1000 samples from 200 sites.

Paleomagnetism in the San Juan Islands

Paleomagnetic results were obtained from several sedimentary units in the San Juan Islands, including: the Nanaimo Group (Orcas, Stuart, Waldron Is.), The Spieden Group (Spieden and Sentinal Islands), the Haro Formation (San Juan Island).​ Paleolatitudes from these sediment units should bear on the docking and transport history of "Baja-BC"

The current work on tectonics of the Andes in Chile and Argentina includes: Rotations resulting from oblique subduction History of the South Patagonia Batholith

Patterns of anomalously-shallow paleomagnetic results from the Lesbos, Lemnos and Samothrace islands suggest northward displacement of the Aegean Plate relative to Eurasia.

Magnetic fabrics, paleomagnetism, and structures in Ocean Drilling Program core samples from the active prisms of Cascadia, Barbados, and Costa Rica are being studied to examine the interplay between deformation, fluid flow, and chemical diagenesis.

In lake and marine sediments, usually in the oxic-anoxic transition zone (OATZ), live a diverse group of bacteria that use the Earth's magnetic field as a navigation tool. Using magnetic fabrics and other rock-magnetic tools, we are looking at the mechanical behavior of these bacteria in order to evaluate their significance in the remanence recording process.