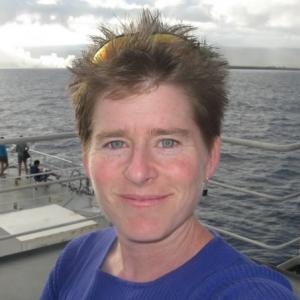 Jackie is the Associate Dean of the college, as well as an associate professor in the Geology department.  Jackie’s undergraduate years were spent at Yale University where she earned degrees in both Physics and English.  She then spent six years as a high school physics teacher in the San Francisco Bay Area before moving to Honolulu to pursue graduate study.  In 2001 Jackie earned her Ph.D. in geophysics from the University of Hawai`i at Mānoa, after which she spent five years working for the Alaska Volcano Observatory, first at the University of Alaska Fairbanks and then as a Mendenhall Postdoc with the U.S. Geological Survey.  She has been at Western since 2006, teaching about topics ranging from introductory geology to earthquake seismology to mantle convection.  Her research focuses on the seismic and acoustic signals generated by volcanoes and landslides.  Most of the volcanoes she studies are in the undersea domain, and she is happiest when on the water.